We produce the Linear Mirror

Inauguration of the first solar plant for the torrefaction of biomass

On Tuesday, July 2., the first industrial pilot plant for the production of solar carbon from unused biomasses was inaugurated at the new headquarters of A&T 2000 Spa in viaIV Genova at Pozzuolo del Friuli. Solar roasted biomass – solar carbon – is an environment-friendly combustible, which can also be gasified. The plant is the result of a collaboration of A&T 2000 Spa – a public waste managment company active in 50 municipalities in the provinces of Udine and Trieste – and Isomorph srl – a physics based high tech company active in the field of renewable energies, which has recently developed a new solar-air heat exchanger, operated with the concentrated light of a Linear Mirror. 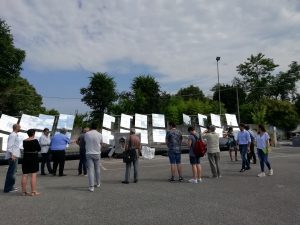 The inauguration had the form of a science festival “solar carbon: a combustible for the future”, organised by A&T 2000 and Isomorph under the sponsorship of ProESOF, as part of the preparational activities of ESOF2020, the most important European event for the dialog between science, technology, society and politics, which will be held at Trieste in July 2020.

Representatives of A&T 2000 and Hans Grassmann for Isomorph explained the pilot plant, the expected results and future developments. Also Prof. Vanni Lughi from the Deparment of Engineering of the University of Trieste as representative of ESOF and Prof. Marina Cobal as director of the school for renewable energies SIER at the University of Udine gave presentations.

The numerous partecipants could have a look at the pilot plant during operation: the plant consists of three Linear Mirrors, which concentrate solar radiation on a solar-air heat exchanger, respectively. The hot air is conducted to a simple roasting device, where cheap biomass – which would not be used otherwise – is heated to a temperature between 100°C and 150°C – the resulting material is called “solar carbon”, because it can substitute fossil carbon in a CO2 neutral way. The plant is part of a bigger project, which aims to gasify the solar carbon in a next step.

The President of A&T 2000, Luciano Aiat, expressed his great satisfaction about the new plant: >>A&T 2000 Spa has begun the practical study of new alternatives for the use of waste biomass, beginning with a new station for collecting biomass in the municipality of San Dorliga della Valle-Dolina, and than by the end of 2018 with a letter of intent with Isomorph srl, in order to make better use of the large amounts of biomass, which are not being used right now, with the goal to offer our customers a new service.<<

Solar-Biomass Hybrid System for the Production of Solar Carbon